to the Graves and back 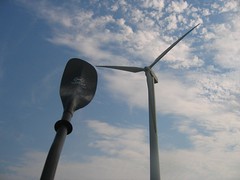 Take a look at any map of Boston Harbor, look really hard at the eastern edge, and you'll see a little cluster of rocks. Sometimes it will be labeled, sometimes not. These are the Graves, host to Graves Light and the last scrap of land before the open ocean. 8 MITOC paddlers set out from Hull to brave the sea and plumb its mysteries. 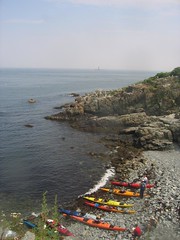 Every MITOC trip is slow to start and this was no exception. The logistical burden of organizing people scales (for small numbers anyway) by N^2. Nonetheless, we launched early enough in the morning to enjoy calm seas and a minimum of boat traffic. Hull's famous windmill turned lazily as we pointed our bows northward. The group established a consistent, unhurried pace and seemed to cross the shipping lane and reach Great Brewster in no time. This was the first technical part of the day: a miles-long sandbar extends from the western edge of the island, kicking up unpredictable waves and sheltering invisible rock fields. I was worried when some folks were slapped broadside by the swells, but nobody rolled or beached. Continuing to the bluffs of Outer Brewster, we stopped for second breakfast and caught our first sight of the day's destination. 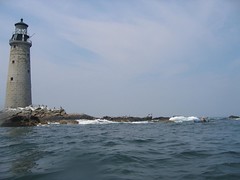 Trip leader R sensibly insisted on minimum full-body polypropeline for everyone. There is wisdom in dressing for the water temperature (65 degrees) instead of the air temperature (95 degrees). But sometimes this wisdom requires limits. R sported a long-underwear top over a farmer-john wetsuit. I'm pretty sure I would have roasted immediately in that outfit. The rest of us took our chances and wore wore swimsuits/spray tops. The water felt so much more comfortable than the ~50 degree seas from the season's inaugural paddle that I wasn't too worried. 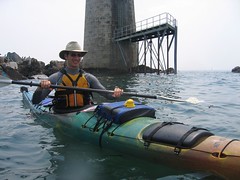 As usual, temperature wasn't my problem: sun was. When we stopped for lunch at Boston Light, I crept from shadow to shadow like a tropically-dressed ninja (or maybe a vampire?) in a desperate attempt to mitigate sunburn. Note in

this photo that I'm the only one hiding in anchor's narrow shade. Fortunately, compulsive application of SPF50 spared me the worst punishment. Some of the guys started ridiculing me for my light-averse behavior, but they're the ones who ended the trip red and crispy. 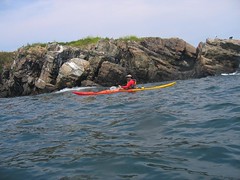 Boston Light is a shining white spire rising out of a grassy patch of utopia where visitors are greeted by friendly lighthouse keepers. Graves is a grey industrial column ready to fall off of its supporting rocks. We approached it to the sound of crashing water, circling the formation and shooting through the gaps. After a short game of toss the jellyfish, we turned back south for home. Best moment at Boston Light: the current caretaker is a woman and her man wears a T-shirt which reads "Lighthouse Keeper's Husband". 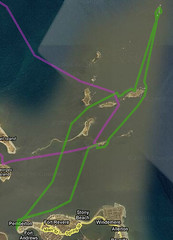 As usual, the final leg of the trip was the hardest. Leaving Little Brewster, the wind kicked up and pushed against our bows. The last 2 miles felt like a progressless slog towards the windmill, never seeming to grow in size. Eventually, the words painted on the side of the turbine resolved themselves and I knew that we had beaten the wind. As we landed the blades spun wildly, screaming in protest against the gale. The nearby snack shack serves a mean vanilla frappe, perfect after a hot day on the water.

(More photos from greg, m0niks, and me.)