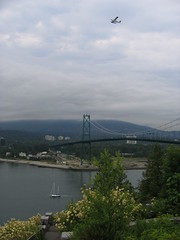 Heading back to the USA today. The Pacific Northwest is finally beginning to resemble itself: chilly, grey, drizzling. Yay! Spend a little time in Vancouver touring the other parts of Stanley Park not visited earlier. The photo is from Prospect Point high above the bike path and looking out at the imposing seas. Great breakfast at forest-gothic Locus. Then a short drive back to Seattle. Easy, right? No.

The border is a mirror image of the Canadian entry. Almost non-existent interview, 1+ hour line. There's a special lane for a "nexus" pass, which gets you flagged through (usually) without interview. We later learn that acquiring such a pass involves a background search, interviews with representatives of both countries' border patrols, processing fees, and some strenuous warnings about abusing the system. Make border crossings a regular 3 hour event and I might be ready to submit to anything. 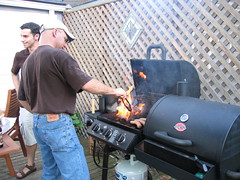 Arrival at vic and knox's place for their out-of-towner-barbecue. This is the casual substitute for a rehearsal dinner, which seems to work for everyone. toutbeurre arrives from Boston, completing the former-employer reunion. 3 different types of spicy sausage combust on the grill to great effect, at which point a midwestern brother-in-law takes over the grilling responsibilities. (because midwestern brothers-in-law are born with grilling in their blood) Bocce ball is played and mastered by a 14 year old nephew. We are introduced to our hosts, the talented nerdseyeview and J. They are based in distant West Seattle (aka "Japan") where even the most adventurous mainlanders dare not tread. Will we survive there, where it is rumored that electricity and running water are novelties?