PNW Day 4: We Stand on Guard for Thee 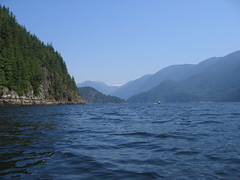 It's always a pleasure to check off a long-held life goal. Today's accomplishment: "kayak a fjord". Deep Cove in North Vancouver isn't exactly the Hardangerfjord, but the slopes are steep, development minimal, and distant mountains snowcapped. At the beginning, there was also no wind... (cue ominous music)

The rental operation there has a pretty good selection of honest touring boats, and I think they thought they were doing me a favor when they put me in a "solstice titan". They probably imagined that I'd be comfy in such a high volume boat, not knowing that I paddle something considerably sleeker back home. Oh well: it beat a SOT abomination or a little 14" day paddler. Cheapie plastic paddle in hand ("I want my kalliste back!") we set off for the most beautiful scenery I have ever seen from a kayak. Despite calm waters on the way out, a stiff breeze picked up shortly before the turnaround point. Our easy trip to Best Point was matched by a hard upwind fight on the way back, but we made it eventually and earned our lunch.

The side-trip after paddling was probably not a good idea. Lighthouse Park gave some good views back towards Vancouver and Horseshoe Bay looked even more incredible than Deep Cove. But this delayed our return to town just enough to get us stuck in a multi-hour traffic jam before the Lion's Gate Bridge. July 1 is Canada Day, so a good portion of british columbia was filtering into town for the fireworks and celebrations. Fortunately, they expressed their polite and considerate canadian identity by calmly queuing, merging, and taking turns. The same backup in Boston would have resulted in a thousands horn honks and possibly a stabbing.

The fireworks were unimpressive on the Fiedler scale, but I enjoyed the opportunity to sit in a cooling park and watch good-natured folks celebrate their fundamental canadianness. However one does that.