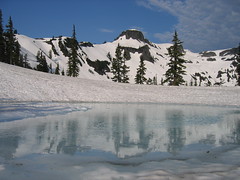 After yesterday's Big Hike, we decided to calm things down with several short walks. The photo is from a mosey around the Mt Baker ski area where we reached an altitude greater than Goat Mtn just by starting at the parking lot. Yes, it's cheating but you do pay a price: we were eventually turned back by plowing operations throwing watermelon-sized chunks of ice and the occasional rock. After visiting a waterfall (emblazoned with dire warnings about dumbass photographers who get themselves killed going for that perfect shot) we decided to make for the canadian border. And that's where the real fun started...

I remember driving to grandma's house as a kid and seeing the "World's Friendliest Border" sign. This time I wasn't separately detained by mounties, but was still subjected to a long interview mostly geared at figuring out whether I was planning on establishing permanent residency. They didn't ask the old questions about guns or drugs: now they worry about white people threatening to move to canada. Must be a bush refugee thing. 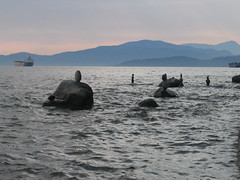 After the border grilling, it was a short drive to Vancouver proper. Lynn Canyon was good for another short hike and another selection of signs warning about the near-certain-death dangerousness of slippery rocks and fast water. (Someone died there just this weekend, apparently.) In town, we attempted to reach the end of huge Stanley Park but got tired much before hitting that goal. Looking down any east/west street in Vancouver you will see it end in tall evergreens (the mighty larch?) instead of more buildings, which is pretty classy. The rocks in the photo are scattered along the west end of the park, arranged first as plausible cairns left by paddlers but quickly becoming improbable towers and vaguely representational figures.

Though it is otherwise charming, there is no air conditioning in our hotel. I imagine that this is not much of a problem most of the time. It's usually 68 degrees and raining here on Canada Day. But in the middle of a dry heat wave, it feels more like the Guadalupe end of NAFTA.