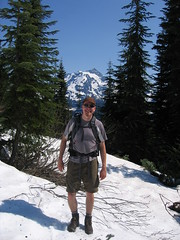 If this mountain were back East, it would be the biggest, baddest peak in the White mountains. We would scream with glee and telemark its still-snowy slopes in July. We would whisper its name in reverent tones. As is, it's a minor prominence in the Cascades and is dwarfed by its much bigger brothers. Still, the ascent is a good hike and even if you don't reach the top it's still about as much vertical as one of the north presidentials.

We woke early and sent vic and knox off to the spa for some much-needed pre-wedding relaxation. Meanwhile, we drove almost to the canadian border in time to hit Goat Mountain. The ascent was well-maintained, moderate, and very long. Unlike our rocky, steep climbs back home this trail featured frequent switchbacks, a dirt floor, and mighty conifers from bottom to top. Rather than a gradual transition to treeline which consists of shorter and shorter trees, we broke to a snowy summit as through a great wall. There were no trail markers leading us to the proper top, so we decided to call the snowfield the trip's end. With Mt Shuksan's glaciers to the south and Mt Baker's white peak to the east, it was all worth the climb.

Vic and Knox totally set us up with Martha Stewart's wilderness kitchen. Following the hike, we set ourselves up at a nearby campground complete with a drawbridge and ice-cold river. (The river was good for cooling down post-hike drinks and a bracing bath.) There's something beautiful about setting up camp 10 minutes from the trailhead. And freeze-dried clam chowder is surprisingly good when you're hungry and tired.