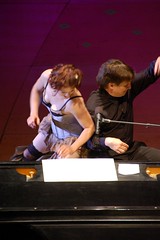 Amanda Palmer of the Dresden Dolls played the Boston Pops last night. This was the most diverse audience I have ever been a member of: tattooed hipsters, grandmas with walkers, fishnetted goths, nebraskan tourists, pink-haired artistes, and fidgety 5th graders. Half of us were there to see Amanda and half were there to see the Pops. I'm not sure what the BSO regulars thought of it, but the performance was approachable enough that it didn't cause any strokes.

She played 3 Dolls favorites, 4 new solo works, and 4 covers/standards. Adding orchestration to "Coin-Operated Boy" ruined it with gimmickry, though it was fun to see her and director Lockhart play with each other's timing and tempo. Her (upcoming-release) piece on Columbine benefited most from the theatrical/orchestral setting and was more powerful than the CD version will probably end up being. (Also, it gave a chance for

clara_girl to get out on the floor!)

I appreciate a performer who is overwhelmed by her own situation. When Amanda first sat at her piano, she bubbled "This is awesome!" as if reaching a life-goal. That kind of honest glee is hard to ignore.

Update: The Globe suggested opening the show with some Kurt Weill or other cabaret-era modernist music instead of the pleasant-but-arbitrary Holst. Great idea!