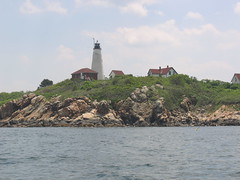 Last time we tried to reach Great Misery, we failed due to a misunderstanding of the layout and scale of Salem Sound. Armed with hard-won knowledge, this particular outing was hampered only by the profound difficulty of finding parking anywhere near the water on the north shore. (There should be a sign "Welcome to Manchester. Now Go Away.")

youraverageninj and I prefer to make new and exciting mistakes instead of repeating old, boring ones. 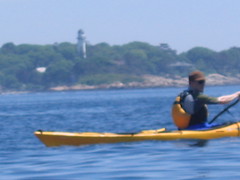 The day inland was beastly hot, but out on the water the sea breezes kept conditions comfortable. After skirting the coast for a while, we made landfall on Great Misery Island for some gear readjustment. We were eventually repelled by rock-throwing children. On the windward coast, the wind and waves picked up and treated us to some breakers against the rocks, many displaying actual seafoam green. We circumnavigated Little Misery, ate a fine lunch, then paddled through the narrow gap between the two islands. Surf and tide funnel through here, giving us our biggest rollercoaster swells of the day. We continued south past inhabited Baker island and admired the lighthouse. Then it was around the coast to visit Marblehead Rock, which we had previously confused for Misery and used as a remote lobster kitchen. A regatta's colorful spinnakers danced on the horizon as we reached the turnaround point and headed back across the boating channel. As we reached shore, I celebrated the day with a roll in minor surf. Success! 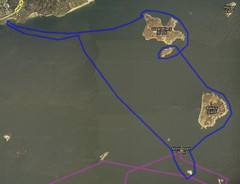 The Sound contained an unusual number of "null points" where varying tides and currents would intersect and stall. Crossing one, I could see a trail of debris extend at least half a mile in either direction. As the pollen gets scrubbed from the air, it ends up in the ocean, then concentrates in these pockets. I watched my blade dip into a suspended cloud of yellow dust and hoped that contact allergies aren't as bad as the inhaled variety. Fortunately, the boaters and beachgoers of the North Shore seem to litter less than Boston Harbor so I had to pick only a half bag of trash out of the flotsam.

In the end, the route was 9.2 miles on the open ocean. And without one bit of misery (the uncapitalized kind).

Photos copyright the Ninja, because I left my camera at work.
Tags: kayak, northshore
Subscribe