Log: Spring 2013 trip to Japan. My last trip in 2007 barely touched on Tokyo before heading down to Kyoto, Koya-san, Hiroshima, and Naoshima. This trip was almost its perfect complement with a few days in Tokyo before heading to the northern island of Hokkaido. The place wasn't as alien this time, which allowed me to appreciate Japan more on its merits and less as an easily-overwhelmed Westerner constantly saying "OMG WTF". From my notebook, by by topic:


Wakanai in the far north serves incredible seafood, especially salmon, ikura, and crab. It turns out, though, that one of my favorite things about ikura (salmon roe) is the pop-pop texture that comes from having a thick skin, an attribute missing when it's fresh. Still, it had never occurred to me that you can make a meal out of a big bowl of rice and a heavy heaping of ikura. So simple, and satisfying.

Hokkaido is Japan's dairyland, so there is more cheese and general european influence in the cooking than elsewhere. Who would have thought that my cycling lunch would be fondue?

When I was last in Hiroshima, I ran across a well-intentioned and baffling international culture fair. This time, Sapporo hosted an international food fair in Odori park. After experiencing the Japanese take on Polish food last time, I decide to avoid the options in this fair. Especially once I see a supposedly-German horror called "Currywurst." [edit: Currywurst has been popular street food in Berlin since 1949. I had thought that currywurst was a mistaken Japanese misunderstanding of western food like putting lox on a cinnamon raisin bagel. Instead, it looks like we have to blame the Germans for this particular crime against food.]

Remember William Gibson's Idoru, a story about a synthetic Japanese pop star who draws gigantic crowds? While in Mori tower, I run across a cafe devoted to Hatsune Miku, a blue-haired artificial pop star who sells out arena shows. They even serve rice dishes with a very-vague resemblance of her face. Even Gibson never came up with that.


it is impossible to buy a prepaid SIM card in Japan, even in Akihabara. People at the mobile stores look at you like you're some kind of criminal if you try.

There is more wifi, even free wifi, than last time I was here. While business hotels want you to pay by the day, smaller hostels and ryokan are now bathed in the warm glow of wireless connectivity. JR even lights up some of the bigger train stations with free wifi. With a bit of creativity, the lack of a local SIM card hasn't cause as many problems as I had feared.

I'm trying to use my downtime productively by learning the Katakana alphabet on my phone. Adaptive flash cards are pretty cool - I wish I had something similar when I was learning German. Katakana isn't that hard, with the exception of a few characters that look very similar. Once you know it, you can use it to spell out all the western words like "Ho-te-ru" (hotel). Being able to read even a few key signs really demystifies the place and makes it feel less exotic. (Though it's still fun to crack the public codes of all those squiggly characters.)

Three of our hotels/ryokans had on-site 24-hour onsens. Soaking in a geothermally-heated outdoor rock bath is a great way to end the day, especially after a hard hike. Though tattoos are technically forbidden in onsen, nobody gave me trouble for my ink.

While hiking on rebun-to, I happened upon a wilderness pit toilet. It was outfitted in cedar and had a heated toilet seat! Only the japanese would run a generator miles from the electrical grid just to heat a toilet seat. (Unrelated to plumbing, but the Japanese are also the only people in the world who will put cute frogs or ducks on their construction sites.)


we got lucky with rain, only catching some showers on our penultimate morning, which we were spending on the train anyway.

Hokkaido is pretty far north, so even in almost-june there is ample snow. This killed our plan for a multi-day traverse through Daisetzusan - it would have been unsafe to try to find trails buried under 2m of snow

Hike number one: perimeter walk of rebun-to the "flower island". I was kind of looking forward to hiking the neighboring mini-Fuji Rishi but there was too much snow for us to summit without more specialized gear. Instead, Rebun offered spectacular views of Rishi and dramatic cliffside trails that skirted sheer valleys.

Hike Two: All the way to the top of Asahi, the tallest mountain in Hokkaido. Asahi sits at the western edge of the largest national park in Japan, so the climb up looks out mostly on the valleys, lakes, and farmlands of the foothills. Once you reach the top, though, the view opens up to show the entire volcanic rift canyon of Daisetzusan with dozens of snow-capped peaks. Add in some active volcanic vents and it's unlike anything back in New Hampshire.

Bike: Because the snow prevented us from our planned multi-day traverse over Daisetzusan, we arranged a cycle hire and luggage transport to Biei. The first 12k of the ride were a thrilling 800m drop down the approach to Daisetzusan - I was happy to have strong disk brakes here. After that, the scenery moderated to become rolling hills that reminded me of central New York (if central New York had volcanoes in the background), complete with dairy farms and tractors. Part of the trip involved a loop through an area with trees made famous by appearing in advertisements for cigarettes or deodorant or something. Now tourists rent cars or board busses to see these famous trees. A few have dedicated parking lots. Japan: put a tree in a commercial, create an entire tourist industry. (In their defense, they are quite picturesque trees.)

Sapporo also has a few hills ringing the city. Mt. Maruyama is a low-key hike that offers good overviews of the town, all the way to the ocean on a clear day. I could never see myself living somewhere as congested and overwhelming as Tokyo, but Sapporo is very much my kind of town. With close-by mountains, ocean, and sushi it meets all of my requirements for a place to live. Add blooming flowers everywhere, a quality public transport system, and a university and you have a livable city.

Swan boats of Ueno Park, apropos of nothing.


The trip happened to coincide with the Grand National Sumo Tournament, which provided an excellent chance to check out some unique Japanese culture. We made the rookie mistake of showing up early in the morning, when the lower-ranked wrestlers compete. The bouts improved throughout the day and did display surprising athleticism - the stereotype of two huge guys just colliding with each other is belied by feints, dodges, throws, and quite a bit of psychological warfare. Still, the bouts are short at typically under 30 seconds with about 5 minutes of ceremony and ritual between each. I suppose it gives sumo about the same active cycle time as American football. Cuisine bonus: got to try the "sumo stew" that all the wrestlers eat. It's hearty and filling. I may have found next year's Soup Swap entry. (The label practically draws itself.)

On day 1 in Tokyo, I wandered a few of the more modern districts like Mori with its contemporary art museum and the harbor district with its shopping centers and full-scale gundam battlesuit. At the time, I felt a queasy lack of "authenticity" - everything seemed fake and plasticy. On day 3, I engaged in some more traditional-style wandering through the temples and cemeteries of Ueno park and the shrines of Asakusa. Looking carefully at the construction dates, one notices that all of the "old" stuff was rebuilt in the 60s and 70s when the Japanese economy had recovered enough to reconstruct the sites destroyed during the Allied firebombing campaigns. The massive Edo-Tokyo museum similarly resorts to replicas of Meiji-era buildings. The quest for authenticity in Tokyo is a farcical one; the traditional "old" buildings are just a modern reinterpretation of the original structures and the shopping malls packed with teenagers buying licensed-character junk are probably the closest thing that exists to a "real" Tokyo.

Fashion note: I brought only my FiveFinger shoes and hiking boots. The Japanese were generally intrigued by the VFFs, sometimes staring or exclaiming in surprise. One ryokan hostess moved our shoes into the proper shoe storage place and looked at them for a long time saying "Oh... very Japanese shoes." It's not unusual here to wear toe shoes that separate out the big toe. VFFs are just the natural ad-absurdum extension, I suppose. 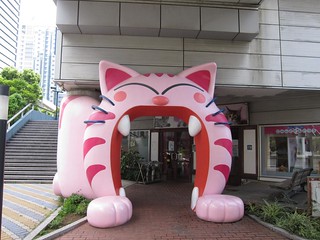 Also of note: one of the shopping malls had a "cat cafe" where customers pay a premium to sip tea amongst a cloud of allergens. This might be close to my personal definition of Hell.