This trip was a triumph of improvised backcountry wayfinding. Which is to say that I began and ended each day exactly where I intended to. Which is to say that I was lost a lot. I spent 4 days solo winter hiking the Appalachian Trail through the Carrabassett Valley in Maine and the adventure was more difficult than expected, rarely comfortable, and totally rewarding. 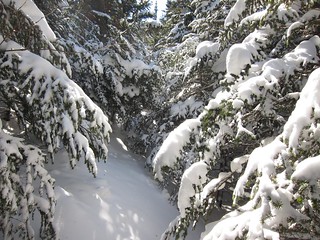 The biggest problem was finding and staying on the trail. With 10ft of snow, you certainly can't see the footpath. Heck, the snow usually covered the distinctive white stripe of the AT's blaze. Even when it wasn't buried, the blaze was nearly indistinguishable from snow splotches, peeled birch bark, or a particularly sneaky form of fungus/mold/lichen that looks an awful lot like an AT blaze. [Game: spot the blaze (easy)] Furthermore, even if you were on-trail, the snowpack was generally above the bottoms of the trees (typically trimmed to a height of 8ft) so the poor hiker still has to take snowy branches to the face. Oh, and I downloaded an obsolete map set to my GPS so I couldn't even use technology to find the trail in the 40-50% that had been rerouted in the 90s. Add all this to carrying the weight of a full winter pack and you're talking slow, hard work. I had planned on bagging 8x4000' peaks in 4 days, but the navigation troubles forced me to omit the 3 peaks that would have required distance-adding side trips. 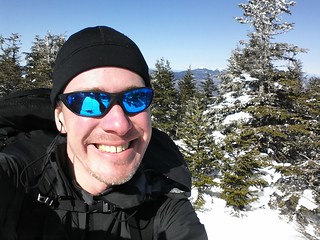 Still, 5x4k isn't bad. With a head-start of 1 peak a few years ago, I now have 6 of Maine's 14. Skies ranged from cloudy to completely clear, but each time I hit a prominence I was able to see the entire Carrabassett valley and was never socked in. There's a beauty in standing on a summit knowing you're the only person on the mountain that day, maybe that week or month. My most notable peak wasn't even a 4k - at 3600', Saddleback Junior sits smack in the middle of the range with excellent views of all 8 peaks. I broke camp at 4am and trekked by headlamp to reach it right at sunrise to beautiful effect. Worst peak: Saddleback proper. In clear weather, you can see Mount Washington, Kathadin, and the Atlantic. I was not there during clear weather. 60+mph wind gusts drove hail pellets into my face and generally encouraged a quick exit from the summit. I still managed to smile, though. 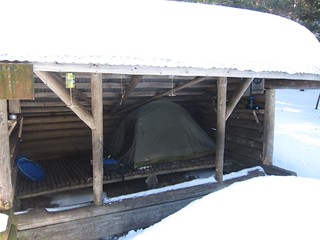 When I was a Boy Scout, I was consistently miserable on every midwinter "Polar Bear" camping trip and vowed never to do it again. And then I would be out the next month, having forgotten the frozen fingers and remembered the fun of fresh snow crunching under my feet. When I was hiking on this trip, the exertion kept me warm. When sleeping, my winter sleeping bag was always toasty. Everything else was just as miserable as I always fail to remember. Setting camp requires a lot of fiddly manual dexterity, so you can't even wear thick gloves while you're setting the tent or cooking dinner. Fortunately, two of the three nights had lean-tos so I didn't have to erect the tent and cook on packed snow. My biggest problem was water: with subfreezing temperatures my water bottle would freeze up after a few hours, so I had to use my stove to melt snow pretty frequently. I had planned to read and watch videos on my phone in the comfort of my sleeping bag in the evenings, but my new solar array's paltry charging ability limited the phone's use strictly to halfhearted navigational assistance. My evening's entertainment was therefore limited to reading the stories of through-hikers scribbled in the hut logs and finishing the day with a 50mL nip of whisky. Which, come to think of it, is probably a more authentic wilderness experience than watching a movie about skiing zombie nazis on a solar-powered phone. You win, Thoreau. 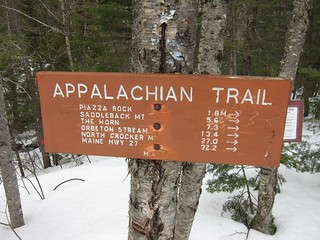 Total distance traveled: At least 32 hard miles (map), probably more given all the navigational fiascoes. Somehow, I emerged at the end with enough energy to drive all the way home without napping. First activities upon return to civilization: desperately-needed shower and a feast of chicken wings. I'd like to thank Big Agnes equipment for the incredible Q-core sleeping pad that kept me comfortable and warm at all times, the Boy Scouts of America for teaching me that snow is no reason to stay indoors, good fortune for not twisting my ankle while out of cell phone range, and the State of Maine for not towing my car from its highly dubious parking spot. Carrabassett Valley: you still hold 5 more 4k peaks that I need to bag. See you again during blackfly season.