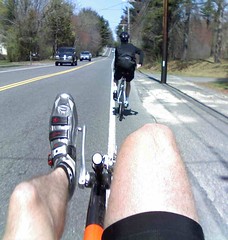 Ever have one of those rides where you come so close to some numeric goal that you're tempted to do laps of the parking lot just to see the odometer clock over? .... Uh, no? Maybe it's just me.

Today I rode down to Mansfield with capable pacer D. The supposed target was the the New England Folk Festival, but that was more chosen for its distance than an actual desire to see Morris dancing. (shudder. those knee-bells freak me out.) The multicultural food fair was a win, though, and homemade Lithuanian latkes taste awesome after a morning of hard riding. The roads to the southwest of Boston lack the rural charm of the northern suburbs or the obvious delights of the coast, but it was good to cover some new territory. When we returned to the start, my total clocked distance was short of a metric century by just 1km.

I did a short jaunt through my neighborhood at home just to hit an even 62.1 mi. I felt no more accomplished after this than before.