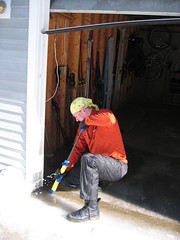 Since last weekend, New Hampshire has received some snow, some rain, some melting temperature, and a hard freeze. Usually, I head north to be challenged by steeps and bumps. This time, I was confronted by a garage door embedded in a solid block of ice. It was eventually dislodged by a lot of boiling water, but that created a new problem: how to clear it before re-freezing caused the same problem all over again? While not impressive as

jtidwell's use of her mountaineering axe as a stairway de-icer, I nominate the service of my kayak pump to the same pathetic awards ceremony.

A mixed weekend, but fun in its own way. I'll take it.