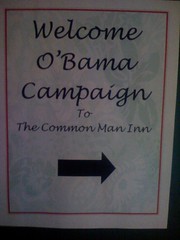 The poor guy just can't catch a break. First he suffered most of 2007 with CNN and multiple newspapers misspelling his name "Osama". Now his own volunteers think he's Irish or something. Photo taken in Plymouth, NH a mere 2 days before the primary.

In other north-country news, Cannon was 50 degrees near the peak. Spring skiing conditions in January! No gloves, no hat, no goggles, no jacket, no visibility. The snow was great for control, and my edges carved true. Let's call this the true beginning of the season and forget all that unpleasantness at Killington.