Journey Over the Land Below

In 1949, the State of Maine seized the farms and homes of about 200 people to create an artificial lake for a private company to generate electrical power. The town of Flagstaff became Flagstaff Lake, and the locals haven't forgotten. I traveled up to the Carrabassett Valley to paddle over the historic sites and also bag a few more 4k peaks, making for a great week.

Mt. Redington only recently became a 4k peak after a wind farm resurvey added 12 feet to its height. There is no official trail to the top, but a composite of sketchy internet resources enables the intrepid hiker to follow logging roads and herd paths to the top. With a low cloud deck, we saw no views but enjoyed the mysterious dancing fog among the pines. It was a long but flat hike, and the ample raspberries and blueberries provided adequate compensation for the lack of vistas. ME4k #9/14.

Sugarloaf sits next to Redington at the end of Carrabasset Valley Road, so we camped on the AT next to the river and hiked up to bag the highest peak in the valley. I missed Sugarloaf on my March thru-hike due to some difficulty in wayfinding, so it was satisfying to check this one off. The first two miles are a steep rise with fine views down the valley, followed by a closed mile of spur trail. The top is less impressive since the summit is littered with ski lifts, a ghost lodge, and radio antennas. Our feeling of accomplishment was also diminished by the antenna workers at the top who had ridden ATVs up to do some maintenance. At least we had a bored cop available to take our photo. ME4k #10/14.

The Bigelow Range is supposed to be the gem of the valley, with a broken ridge along the south side of Flagstaff Lake. Peakbagger and birthday-girl yuper joined us for her first ME4k climb up from the lake. Unfortunately, rampant clouds obscured any omnidirectional panoramas but the cover was sufficiently intermittent that some patience would allow views down into the valley or the lake. Also, the hike up the ridge offered multiple lookouts of Little Bigelow below the cloud deck.

Avery Peak is named after the guy who shepherded the creation of the AT. It's cool that the peak bearing his name is at the 2000 mile mark from Georgia. This is thru-hiker season and we met (and smelled) our fair share as they tromped through. ME4k #11 and #12/14. 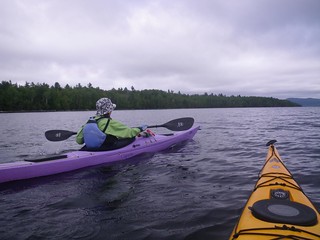 I had hoped that our 16-mile kayak trip from the west to east end of Flagstaff Lake would enable some views of the still-extant structures in the drowned town of Flagstaff. Unfortunately, an unusual weather pattern kicked up and we spent most of the day kayaking into 10kt headwinds and rain. Not the most pleasant of conditions, and much to choppy to enable views deep into the lake. From a historical perspective, our paddle over the Land Below was a bust. Still, it was cool to travel in a different landscape than my customary coastal ocean route. I enjoyed tiny islands, sheltering mountains, warm fresh water, and sightings of bald eagles and loons. Still, MH&T's Flagstaff Hut was a welcome sight after the strenuous trip. Day 2 of the paddle from the hut to the Round Barn campsite was dryer, shorter, and a little less windy so we could relax a bit more and enjoy the scenery.

The dam at the end of Flagstaff Lake feeds into the Dead River, which gets its name because it is usually so calm that it's no problem to paddle upriver. On special big-water release days, though, NexEra lets a few thousand CFS of water through the gates and the Dead turns into a decidedly less-calm trip. I joined a few hundred other rafters and kayakers for a sustained 14-mile rapid jubilee. Unfortunately, the river never develops the really hairy big water problems that I love but it was fun to have sustained class II/III water with no boring bits. I don't think I'll raft the Dead again (not challenging enough), but I'm glad I tried it once. 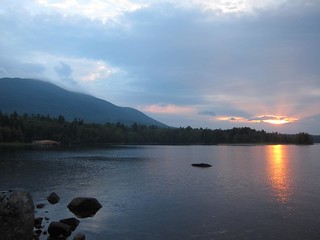 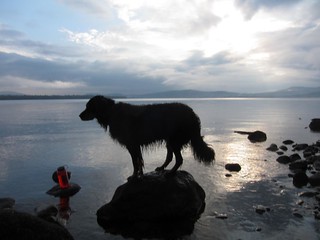 In addition to the aforementioned spot between Redington and Sugarloaf, we also located a perfect campsite at Round Barn. Yuper and Sasha joined us on a little peak jutting out into Flagstaff, affording views of the Bigelows and catching both sunrise and sunset. Beautiful, if somewhat buggy.

This is my third extended trip to the Carrabassett Valley - see also hut-to-hut skiing and AT thru-hike. This beautiful patch of the world is just close enough that it makes for a great last-minute low-overhead vacation and just far enough away that it deserves more time than a single weekend trip. It still have one more ME4k peak to bag here, so count on me to return again.