Katahdin: The Roof of Maine

You'd think I'd be jaded by now. You'd think that one mountain would be pretty much like another once you've bagged 55 of New England's 67 4000ft peaks. That's what I expected on Katahdin, and I was dead wrong:

A swarm of factors conspired to keep me off this mountain for years, despite the fact that it's long been at the top of my active highpoint lists. Baxter State Park doesn't allow dogs, so I could never hike it with Kaya. Management strictly limits the number of hikers on the mountain, and the first time I tried to climb it I got diverted over to North Brother. It's a solid 6-7 hour drive. Exposed rocks become unsafe in even mildly unfavorable weather conditions. Et cetera. Et cetera. After this weekend, I'm glad that all those other attempts got diverted because this successful attempt was almost the perfect hike. It was also an appropriate college graduation present for my outdoorsy cousin and special hiking guest star L. 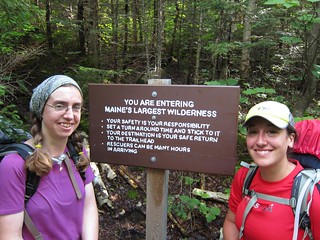 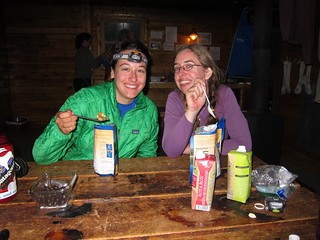 Day 1 didn't even have a big hike. We drove in the car for most of the day, clearing the front gate with an hour to spare before it closed. After reaching our trailhead, we hiked up the 3.3 miles to the rustic Chimney Pond campground. This was a pretty flat hike, but with our heavy overnight packs we noticed the portions that were slightly steeper than others. Every once in a while we were treated to views of Katahdin through breaks in the trees, which whetted our appetite for the full mountain. A new weather front wasn't quite finished rolling, forcing us to endure hazy skies with a damp, insect-bitten heat. Eventually, we reached our bunkhouse at the campground with its perfect view of the South Basin. Surrounded on 3 sides by a slabby headwall, our little campground felt insignificant before the mass of granite above us. We pumped water, cooked dinner, appreciated the sunset alpenglow, played Pit, and settled in for a fitful sleep before the big day. 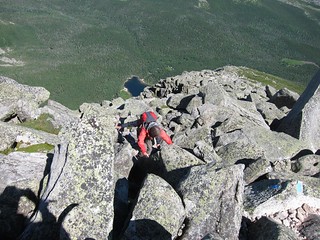 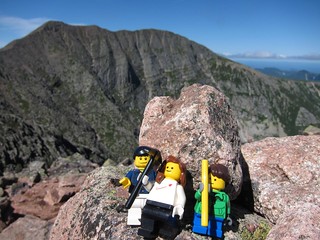 Day 2 began perfect, and stayed that way all day. The new front rolled in overnight and welcomed us with blessedly crisp 50-degree morning temperatures. We stripped our heavy camp packs down to their day-hiking essentials and set out for our ambitious "Grand Circle" tour of Katahdin's South Basin. The hike began with the steep Dudley Trail up to Pamola Peak on the south end of the C-shaped basin. Climbing about 2000 feet in a mile, this trail is essentially a boulder slide requiring semi-technical rock scrambling the entire way. Foul language was used. The top of Pamola finally gave us views into the Hundred Mile Wilderness to Baxter's west, as well as a good preview of the wicked Knife Edge trail that would lift us to Baxter Peak. 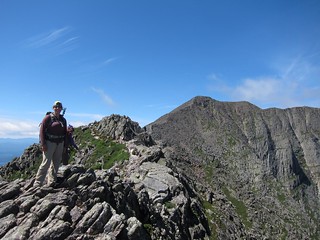 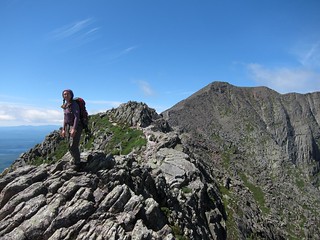 The Knife Edge from Pamola to Baxter is played up as a mere 32" wide rock-hop with thousand-foot sheer drops on either side. It's not actually that bad - most of the trail is actually wider and there are plenty of ledges where you could catch yourself if you fell. The scariest part of the cross-peak traverse is actually the Chimneys, two broken 40+ foot sheers climb that actually do have some plummet potential. The Edge itself is merely a long clamber over serrated granite with incredible views on both sides of the ridge. I wouldn't want to hike it in high winds and/or ice, though.

Most people hike Katahdin from the Abol Trail (west) or the Cathedral/Saddle Trails (east), so they don't even tend to reach South Baxter Peak. As a result, it's a pretty chill place without many people. We designated it our main lunch and photo spot, enjoying the unbroken majesty of the view out over the south basin.

That said, when you get to Baxter Peak proper, it's worth dealing with all the other people to stop and take a photo with the official "Northern Terminus of the A.T. Sign." Once you've bagged Katahdin the hard way, the northern trail off the summit leads to the relatively gentle, grassy slopes of the Tablelands. At this point, we were hiking the outside slope of an ancient domed volcano, rather than the caldera that got blown to pieces when it last exploded. dr_sunflare and L almost cried for joy when they saw how manageable the trail is. We bypassed the Cathedral and Saddle trails that would have taken us back to Chimney Pond, opting to push on for one more peak on the south edge of the basin.

Hamlin Peak is the hidden gem of Baxter State Park. Katahdin gets all the notice because of its height and the intimidating Knife Edge trail. Hamlin is special because it sits between two bowls and features a treeless ridge walk that enables a simultaneous view into both for most of its length. I hear it's an incredible place to catch the sunset. Since we left the saddle, we saw nobody and were able to eat and rest with Hamlin entirely to ourselves. Then came the task of picking our way down the ridge and eventually entering the basin forest to return to camp.

Back at the bunkhouse, we cooked ourselves a huge dinner and immediately fell to sleep. Hard. Waking to another cool morning, we geared up our now-lighter packs (no food!) and walked with protesting knees down the 3.3 miles back to the car. We celebrated with second breakfast at a hiker's cafe in Millinocket that features signatures and graffiti from a decade of through-hikers. More driving, and we reached home secure in a sense of accomplishment and wonder.

A note about photography: You'll notice more panoramic shots than usual above. Almost every single view on this trip was 360-degrees of omnidirectional awesome. Even the traditional panoramas posted here don't fully capture what it's like to stand on Hamlin and look down into both calderas. Check out these two public Google+ posts one and two to pan around and get an immersive sense of just how incredible this mountain range is. FWIW the image above is what happens when photosphere fails to stitch its image set - sort of abstract and arty. (Wish there was some good way to embed these "photospheres" into a LiveJournal post.) 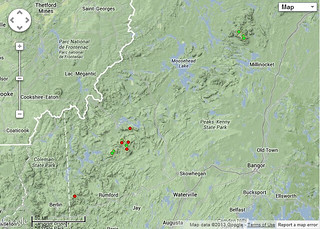 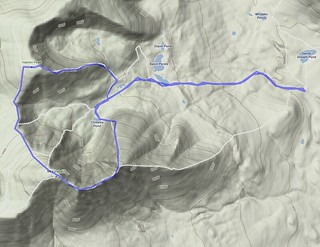